Hi Folks. New member here. I just posted my first comment on the watering hole about a new antique tin boat (1957). Just brough a garage find home: 1958 super seahorse 35 to power it. Super clean motor but I haven't tried to turn it over/compression test/ anything yet. I just bought a new impeller. plugs, fuel lines. Planning a carburator rebuild. Also looking for the right way to spell carburetor. I'm not sure what else something this old thing might need to get started. Not sure what seals, etc. it may need. Any ideas are welcome. Thanks. Bruce

Too bad it was repainted. The 1958 colors were white with the fins being gold. Anyway......
You asked about what else you will need. The engine is a short shaft so hopefully so is your transom. This engine absolutely needs to be run on a 24:1 mixture to live a proper service life. You will most likely need to replace the shift rod o-ring. Almost all of these need that by now. Replace your spagettii seal between the gearcase halves as well while you are at it. Check your gearcase for water or milky oil. You will absolutely need condensers and may need coils as well. Look for any cracks in the coils. Cracks will allow secondary discharge to ground as the coil heats. Do not change your points but rather carefully dress the contact surfaces and polish a bit. Stay with OEM parts for this as Sierra condensers sometimes will not even make it away from the dock. The OEM carb kit includes a new float and packing washers. Your float will be cork and it will or should definitely need to be replaced. Not included in a Sierra kit nor are the packing washers.
A good tip for you is to do the ignition, carb, and gearcase completely and properly. Saves a lot of time later on down the road. I have done too many of these to count and found that if you do your job completely the first time you will have several years of reliability ahead of you down the road.

Thanks Pappy! That is exactly what I was looking for. The list takes my knowledge to it's limit, but I think I can handle it. Hoping to be able to find the seals/o-rings. The short shaft length works (pure luck). Really looking to check compression, but I have to pick up an engine hoist tomorrow to get it out of the wheelbarrow. It's the first (maybe the only) to have a double walled shaft casement. I found a service manual download online so I have a big legup there. Appreciate the thoughtful help. Oddly and maybe wrongly, I don't think it was repainted. It looks and feels like factory enamel. I know , nothing I've found shows this color--just the standard maroon/ivory or ivory/maroon paint, but the few chip spots or wear spots show nothing but primer. The paint seems to be a baked-on enamel or something like it. Online, I've never found a departure from the standard color scheme. No slop at all around trim pieces. If it's a repaint, it's a remarkable effort. Maybe some promotional factory thing? The guy who had it was just a normal Joe like me-not motivated enough to go to a major paint effort and he was the original owner. It came with Evinrude remote controls that appear to be compatible. Anyway, I'll put some work into this. Best, and I'll send out an update if there's anything interesting to report. Bruce.
C

The Cork Float is a UNREAL Problem to find.. If you do not know it is a problem. Been there.
I have cleaned & recoated several. Does wonders if done correctly. I would do the float check first. It clears up problems before they have you changing everything.

Repaint? Trust me when I tell you. Mercury outboards were all black back then. No way in He** was OMC going to do a promotional paint job in black!
The work is pretty simple on this engine except for the shift rod ORing and that is not a big deal. There are complete reseal kits out there for the gearcase but it is a safe bet the shift rod oring will be the culprit if you find signs of water in the gearcase.
Yes, 1958 was the first year for the "Super Quiet" exhaust system and it was truly remarkable how much quieter they were. I love mine and have put probably a couple thousand miles on it if not more so far.
Your OEM carb kit # should be either a 439074 or 075. Getting harder to find now but ebay should have them from time to time...start searching now.
A

When I was a young kad my Dad had one if these motors on his 16' Lyman. His was white with gold trim and also had the name "Javelin" on it. Not sure but those colors might have been for the Javelin model....great memories..

Airshot - Your Dad's engine was a 1957 Johnson Javelin. Gorgeous engines and much sought after today! Look them up, they are very impressive looking with the colors and vintage styling.
C

I had 1 of those huge Johnson white & gold O B . About 30 to 35 hp. A beast to lift up. Ran very well in a lightweight molded plywood hull.

Pappy, you were so right about the repaint on the black 35hp Super Seahorse. I finally found a couple of small spots that had been taped off prior to painting. Too bad about the authenticity, but it does look cool to me. And someone did a kickass prep and paint job back in the year whatever... Ready to get the work done and listen to this thing rumble.
N

Pappy I seldom ever even think about disputing you but you are wrong about the colors of Mercury motors in '58. All I ever saw that vintage and size was primarily white.

LOL You are absolutely correct! Even better considering I am around vintage and antique engines all the time and had I thought about that you would not have had to correct me! Hey.....somebody has to keep me honest from time to time.
No such thing as a Black Johnson though.....hmmmmm that didn't sound right.
N

Pappy said:
LOL You are absolutely correct! Even better considering I am around vintage and antique engines all the time and had I thought about that you would not have had to correct me! Hey.....somebody has to keep me honest from time to time.
No such thing as a Black Johnson though.....hmmmmm that didn't sound right.
Click to expand...

Correct, I about fell out about 2000 when Johnson went to that dark charcoal. Of coarse it didn't last long.

Yeah, I am not touching that last sentence. LOL

Just for giggles, I'll toss a few ideas into this mix of crayons...

100% the Johnson line did not offer color options. The model one chose each year was the single color combo that they offered for that model.
In 1958, the Super Sea Horse was Johnson Cream and Javelin Gold Metallic. (the '58 was not a Javelin badge, but wore the same gold formula of paint as the '57 Golden Javelin)
The Super was the luxe model, though, and the rest of the line wore the '58 version of Holiday Bronze. (*excepting the newly offered Fat Fifty, OMC's first V design, which wore the same gold and white as the Super twin.)

Mercury, however, did offer color options, and as correctly stated above, black was not one of them in 1958. And to be fair, white wasn't either.
Cloud White came along in 1959 and Phantom Black in 1962.
1958 did offer a Metallic Charcoal, though. Along with versions of tan, orange, burgundy, brown, sandwood, and copper, too.

But for sure, the '58 Johnson Super was gold and white.

Pappy said:
Love it!! That had me wearing a big grin! You, sir, have done your homework well. By the way, I have my '58 Super Quiet sitting about 50' from me as I type. Also have a standard '58 Johnson 35hp in the warehouse coming up for sale.
And by the way......"TAKE THAT" Catfisher!!! We were both wrong! Mbullen, you are going to fit in very well around here!
Click to expand...

lol. Y'all will have to excuse my snooty vintage talk from time to time. I live and breathe old crap.
I've got Big Twins up to my big twins.
The ol' work shed has three more walls of hanging racks not even in the picture. 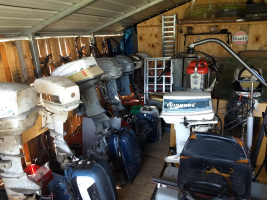 Well.....you have barely scratched the surface in collecting.......
I think I do see a Four Fifty in the back right side? Those are nice engines. Also noted that you have one of the hospital chair lifts . Same here. Light and will lift whatever I need it to. They make a version that will lift over 300 as well I understand.

Pappy said:
Well.....you have barely scratched the surface in collecting.......
I think I do see a Four Fifty in the back right side? Those are nice engines. Also noted that you have one of the hospital chair lifts . Same here. Light and will lift whatever I need it to. They make a version that will lift over 300 as well I understand.
Click to expand...

The med lift is the best thing ever!
It doesn't even mind a Star Flite or two...or four. Lol
Yes, barely scratching the surface...probably around 50-ish at the moment. Mostly in the 25-40hp range as I like to run 'em on a runabout or two. ...or seven. Lol

Apologies for hijacking the Super thread.
Cheers, y'all.
J

Great to see all your vintage motors for sure. I have a 1962 Evinrude Fastwin 18 hp. I was hoping you could point me in the right direction to find a shift handle. Don't need the whole lever, just the lever/handle itself...Thanks in Advance. If it helps it's model number 15034.
Last edited: Jan 23, 2023

Jamesdean - Go to marineengine.com and look it up in their 1958 parts breakdowns and either order it from then or take the part number and check Ebay. Second place to look is to to to www.aomci.org and put something in the classified section in there.

L
I'm a Grommet here. This is the boat that drew me in to the Forum. Found it up in Montana. I haven't been able to find out what it is.
2