Was suggested I post about the trailer for the F-9 here. It needed a lot of work, but I'm getting towards the end of that. 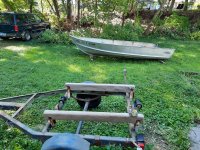 Keel rollers torn up, bunks stick straight up in a way that only the edge of the 2x4 contacts the hull of the boat. Between where the bunks were mounted and the keel-rollers bolted to angles welded to the frame, the boat sat much too high. Add to that, there were 4 sets of holes for each bunk-mount on the rear and 2 sets per on the mid-frame cross member...ya, it was a mess. It's like they mounted the bunks, decided that wasn't where they wanted them, so just drilled new holes and kept doing that until they got the mounts where they wanted them.

Everything torn off, paint striped, rust wire-wheeled off and holes filled with JB Weld. This is where I was at a few days ago, just about to spray primer on the rear section...rest of the parts I'm keeping have already been primed and ready for top-coat. 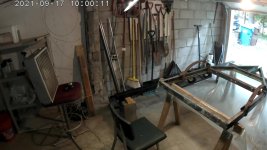 I'm also going to cut off the old coupler as they 'squeezed' the front of the frame (3x3) to fit a coupler made for a 2" frame...so it's 'deformed. New coupler on order which will be mounted with 1/2" bolts rather than being welded on.

Once all that's done - drill new holes for the keel-rollers and bunk supports in their proper locations and put everything back together again. Only things I'm keeping from the original are the frame, axle, tires, winch-mount and fenders.
L

If your going to be cutting off the hitch and damaged tongue will the trailer be long enough? Might be good to add a few feet to the tongue.


I have a trailer fetish. lol 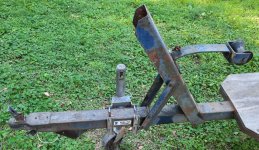 Is there a benefit to mounting the bunk supports with U-bolts over drilling thru the cross piece? Might allow for adjustments as needed?

The bunk supports allow adjustment - just loosen the bolts/nuts and slide up/down as needed. You could even have both bolts through either the upper or lower slot if you wanted

In other news - top coat of paint is going on...gotta get my order to Fastenal in. 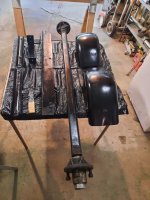 In my experience those style brackets are typically mounted using U-bolts without needing to drill holes in the frame. In addition to height, you gain lateral adjustment if needed down the road.

LDUBS said:
In my experience those style brackets are typically mounted using U-bolts without needing to drill holes in the frame. In addition to height, you gain lateral adjustment if needed down the road.

So U-Bolt with frame strap would be the ticket? I kind of like the side-to-side adjustment potential.

With only that thin joiner between the two slots, does the U-Bolt hold it securely?

Not sure you even need the frame strap but couldn't hurt to use it. Putting the "dimples" against the cross frame keeps the bracket from slipping. Here are a couple of pics I swiped from trailer supply sites: 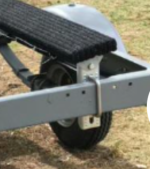 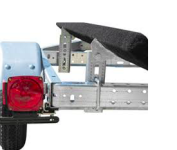 LDUBS said:
Not sure you even need the frame strap but couldn't hurt to use it. Putting the "dimples" against the cross frame keeps the bracket from slipping. Here are a couple of pics I swiped from trailer supply sites:
Click to expand...

Well that'd work - definitely something to think about

Thanks for that...
L

Don't forget about the bearings.

lckstckn2smknbrls said:
Don't forget about the bearings.
Click to expand...

Oh, clean and repack was already on the list.

Re-assembly has begun - big task is to mount the bunks, then remove them with the brackets attached so I can lay on the carpet. 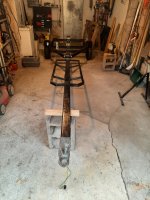 Getting close to the end of this part.
Bunks, winch stand and tongue jack mounted.
Carpet the bunks, mount the winch and bow stop, wire the lights...and it's done. 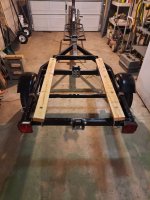 This is what I started with. 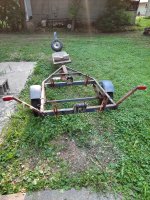 Trailer is done - boat is now on it and in the garage. Things to do around the house tomorrow, so it'll be Monday probably before I start on the boat itself. Short vid showing off my work.
Trailer overview

Correct sizing of trailer to boat?