I'm hoping to get some suggestions on how to move forward.

I have acquired a bow mount trolling motor for my 14' Smokercraft.  Now I need to figure out how to get it mounted to the bow.  I'm searching the forum and finding a number of bow plate threads.  Many are simply a board of wood cut to shape and drilled to the top of the gunwales.

My goal is something that someone might confuse as being factory.  I'm trying to sort out 2 different options:
1. Board or plate on top of the gunwales.  My top rails are not flat so the interface may have a gap. Mounting the trolling motor would be easy and I would be able to mount the base across the nose piece of the boat.  I'm not wild about drilling down into my top rails.  If I ever wanted to undo any of it, I have permanent holes.

2. Tucked under the edge of the gunwale (above the rivets seen in the photo).  The nuts that you see fasten that nose piece to the bow and are mostly tucked underneath the nose piece.  The surface of the plate would be 3/4" below the edge of the top rail.  That drop would impact the angle the base gets fastened due to the nose piece being above it.  All of this would hide the edges of the plate, but the motor would need to be spaced up.

So I would be interested in hearing what everyone thinks is the best approach. Any different approaches that I'm not considering?

I vote over the top.

When I did the one on my Alumacraft, I notched it out around the factory bow plate so it would sit flush, instead of going over the top of it. Looked really good IMO.
C

Might be extra $, but you could use some rubrail (taco brand) to interface the plywood & then overhang the gunnel.
G

I didn't need as much room as you - just enuf to hold a jam cleat and mooring cleat, but the idea is similar. I found a piece of tempered aluminum diamond plate at a metal recycle yard and had at it. Man, that stuff is tough. It ate saber saw blades like candy and it finally took a heavy carbide blade in my Sawzall to cut the stuff. Then I had to bend it - I wanted the new piece to match existing. 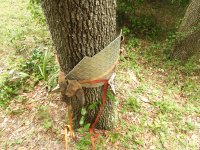 First, I put it on blocks and drove my car onto it. Fine. Backed the car off and it grinned at me and sprang right back flat again. Hmmm....?? I'm renting here and don't have a shop anymore so hadta get creative. Oak tree in the yard gave me an idea. Had to over-bend it to allow for spring back and the ratchet straps put a lot of pressure but it wasn't enuf, so used a crescent wrench to apply more pressure to the ratchets and one broke. The other finally did the job. (I was able to repair the sprung ratchet block) 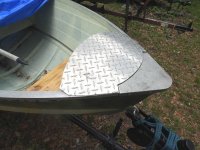 Then, a lot of cutting, filing and fitting and it came out pretty well. The bend is a bit uneven, but with accessories on it, it's hard to notice. The black line at the join is from a felt tip marker - the fit is precise. For an older boat, it's almost pristine and I don't drill holes in it lightly, but sometimes you just hafta bite the bullet and go for it. It was necessary. 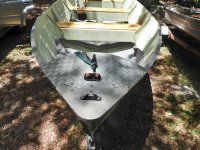 I'm pleased with the final result, but it was far more work than I ever expected.
G

In the 2nd picture in the last post, the edge of the new piece is a bit uneven along the gunnel. After I took that picture, I sat on it to flatten it a bit, then filed the edge smooth. It looks much better now.

A little de-natured alcohol on a rag and that permanent marker mark won't be so permanent. Your end result looks nice and clean.

I went over the top with my hardware running down through the gunwales for two main reasons. 1) I thought it might be a little simpler for shaping/mounting and 2) I also used my trolling platform as a connection point to stabilize the front of my casting deck (a vertical support connects the two), so I wanted/needed the trolling deck to be rock-solid. I did end up cutting/sanding a groove on the bottom of the deck to help the deck sit better along the un-level profile of the gunwale. Everything worked great. No regrets.

I like the way it came out! Nice job!

Kept mine simple which is similar to yours. Sheet of aluminum and cut it then bolts through the caps. Nose definitely stiffer and nice to step on. Bow mount trolling motor which quick disconnect has no issues

Those are some nice designs, wish I had thought of that when I rebuilt my Crestliner.

Fabricating a Mount for Trolling Motor.....Any pics out there?