Hey Boys...I am new to the site. Been checking out all the awesome boats and projects. I just picked up this Lowe mod v. I plan to fish her this season as is. Future mods would be re do the carpet and replace the wood decking. P.O. has aluminum decking under the carpeted wood decks. I see he didnt want to remove old carpet from aluminum decks so he just threw some new wood decks on top. So i plan to do the work he didnt want to do. I will also add a new stereo, maybe paint her. But I definitely want to get her out now and get some blood on the decks.

So the question I have is: In the pics you can see there is pitting in the aluminum on the transom in several spots. Looks like water got into the wood of the transom and just soaked up and caused the pitting? I know I can use some JB weld and patch up the holes. But is there a method you guys know about stopping the corrosion before I patch up with the JB? I would appreciate any comments or suggestions?

I will def post pics of the repair job any future mods. Thanks in advance and fish on boys!

I have a lowe 1852 mod v that I'm restoring/modifying right now. It has the same pitting corrosion issue as you, just more severe. The guy that owned the boat before me tried to patch it before I bought it. His attempts to stop the corrosion did not help. The problem is that there is water getting soaked up by the transom wood which is probably just two pieces of 3/4 ply that is not sealed with anything. So the chemicals from the ply and the aluminum are reacting and creating the corrosion. Until you remove the transom wood and replace it with something that is sealed with spar or resin, I don't think you will slow the process. I could be wrong though. Here's some pics of my transom, your future if you don't act soon 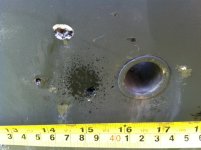 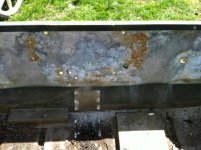 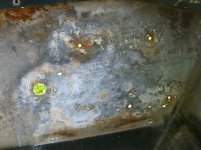 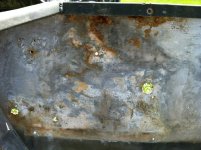 Wire wheel, clean, patch, prime would be what I'd do. That's just me though.

Thanks dgram for the response. I will probably have to end up replacing the wood. How hard is it
to remove the old transom and replace?

Thanks for the tips Matt. I think I will try that first before replacing the wood and see how it works out.
D

SaltyDog said:
Thanks dgram for the response. I will probably have to end up replacing the wood. How hard is it
to remove the old transom and replace?
Click to expand...

The above post has about everything covered. I had some minor piting on the inside portion of my transom under the old wood. I sanded the area really well and covered it with self-etching primer before I installed my new transom wood. Wasn't necessarily a tough job, just time consuming. If I ever do another one it should go much faster now that I know what I'm doing. I detailed my transom replacement in my build thread.

Got the holes from the pitting sanded down and patched with jb waterweld. I just gotta sand them down. After I sand I don't want to have a bunch of white patched circles every where. I was thinking just primer over it and get some paint to match the OD green of the boat. May not look great but will work until I paint the boat next season. Pics to come.

On a side note...I dropped the whole rig off at Dave's Marine over in Portsmouth today to get the remote steering hooked up and motor up to par. On my other thread i posted a question about using Yamaha controls with a mercury motor. Found out it can not be done. So I will be having a mercury control box installed.

With that being said I have a 703 Yamaha control box with cables and harness for sale. PM me for more info and pics if interested.

C
Why not Diamond plating