I'm from western Maine and here for some resources on rebuilding my 20' Lund duckboat. Looking forward to learning from those that have been through this process before. Thanks for having me.


Sent from my iPhone using Tapatalk
4

Hi, located in the N end of Idaho. I'm 72, mending broken ribs. My "short story" is I was born/ raised in a small town up here. When I was "a kid" my Dad was an auto parts guy for NAPA. Even though a parts store, the owner, a boater, held the Johnson franchise. My Dad along with selling parts, relining brakes and turning drums, and a few other things, was the Johnson mechanic.

A few years ago I bought (and sold) some various/ junk boats, and have/ are acquired a number of various outboards, most of which "still need work." My health has really slowed me down.

I have a 12' Crestliner Commander runabout, which I sometimes run with a 35hp, started to fix up and will sell a 14' Sea King, and then stupidly bought a 16' Crestliner "Flying Crest." It is simply too large for me. Last summer I bought a 15' Crestliner Voyager which needs a lot of work, cosmetically, but not much to get it operational.

I'm a Mopar guy, and have a 67 Dart I should be working on right now.

The Sea King I built a replacement aluminum dash, and new transom wood, white oak. The Crestliner I had out 2-3 times and just got into whether to fix/ sell/ etc when the "ribs thing" happened It came with a 63? Evinrude 75hp.

Just found this site and want to give a short introduction. My name is Wayne and I live in Anderson, SC. I have a G3 Eagle 175 with a 50 hp Yamaha. Since I am retired I generally fish at least three days a week, and usually on Hartwell. I was raised into a fishing family and have been fishing my entire life. In my 20’s and 30’s , I ran a big fiberglass boat - usually a Ranger and fished a lot of local and regional tournament circuits. Today, I much prefer a more relaxed pace and rarely fish tournaments. My G3 is the perfect boat for me at this point in my fishing life, and I really enjoy it. I am looking forward to interacting with everyone discussing fishing and boats.

Hi, my name is, if you can't guess, Alex. I'm 80 years old and, mostly bass fishing is what I do at least 4 days a week. In summer I kayak fish the rivers in GA trying for the GA Bass Slam or fish in Lake Lanier. I had a glass bass boat and blew it up so bought a 16' 1987 Grumman Renegade bass boat with a Merc Classic 50. We have a winter mobile home in central FL. I mostly bass fish but have been known to inshore fish for anything that'll bite, mostly trout, snook and redfish. I was hoping to learn something about tin boats on this site and I already have. If you want a smooth ride in choppy water go slow.

Wayne and Alex, you guys are making me feel bad! I was getting out about once a week and thought that was pretty good. But lately I haven't been able to get out at all. Been about 4 weeks maybe. I'm retired. I'm supposed to have all kinds of time on my hands. Funny how it doesn't always work that way.

Hope your guys enjoy this forum.
I

Newbie to the TinBoat forum, thanks for the add! My wife and I have a 1964 14' Lone Star with a 7.5HP Honda tiller named 'Lil Lou. Fun little boat. We live in the Boise, Idaho area and love the outdoors. We enjoy fishing, hunting, camping, hiking and ATV's.

Hi, I'm Gary. I'm retired, and have just purchased a used 14' jon boat modified vee with a 25 Mercury. Did a lot of fishing as a teenager with my dad and uncles on Lk. Norman in the early 70's before the water skiers and jet skis took it over. Jug fishing mostly. I've talked about getting a boat ever since that time, and finally have pulled the trigger. Looking forward to spending time on the Yadkin river impoundments as I now live near Concord, NC. Looking forward to what I can learn off this forum as I'm going to need it.
T

Hello all,
So I'm getting into (or back into) the aluminum world of boating. Mainly because we (my buddy and I) need a boat that I can use for freshwater fishing and hunting access, and my larger 21' SeaCat is much too large for this purpose. Therefore I have violated one of my marriage rules, which is "there will never be more than one boat in the driveway" (or barn) lol!

This being said, my hunting buddy and I bought a 1983 MirroCraft 14' Deep Fisherman with a 20hp Mercury (2-stoke) that we plan to slightly modify for bass fishing and hunting. Our thoughts are to remove the middle bench seat and install side lockers (12" deep off sides) between the front and rear bench seats that will allow us to store and lock our rods or hunting bows along with having a front deck from the rear of the front bench seat to the bow, and of course installing a flat deck between the rear and front bench seats.

We're trying to keep it simple, functional, and low cost while keeping the boat "utility" style.

Hope the build goes well. Please share any tips you have.

Attached is a sketch of what I'm thinking...View attachment Mod Layout Design.pdf
B

Hello, I'm Dustin. I'm 35, from Southeast Kansas. Grew up fishing out of these old tin boats. Just recently bought a late 50's Crestliner Voyager from a Cousin. Waiting on new wheels and tires for the trailer then I will go pick it up and get started. Hoping to set it up as my Catfish and Crappie fishing boat while still being able to go play and pull a tube or cruise the lake.
V

Good morning everyone. I just joined this site to hopefully get some tips and advice for adding a front casting deck and modifying my new jon boat. I just bought (yesterday) a Lowe L1440M. My son and I live in RI and this boat should be perfect for fishing the small freshwater ponds here. We have a center console saltwater boat but wanted to change it up at times. As of now, I have a 55lb thrust trolling motor and gear. We just needed the boat to get started however my plan is to mount a casting deck, get a trolling motor for the bow and add a small outboard such as a 9.9 HP or so. Also need to but a floor deck in and a hatch to cover the battery / gas tank area. Just thought I would say hello and introduce myself.

Hello everyone, name is Drake....and I have a boating problem lol. Im 47 years young and currently hail from Southern NJ, originally from South East Pa. My (3) sons are full grown now so it seems I have way more time for hobbies.I have been visting Tinboats literally for years and years (early-mid 2000's when I first stumbled upon this site) here and there for research with different prior boating projects...soooo many projects haha. This is a great place for ideas or even the occasional boating issue someone has resolved already.

Recently I was doing more research for ideas on my current tin rig im still finishing and decided now would be a great time to potentially make some new friends and show off the current progress on this aluminum brain child of mine.

I will try and get something online tonight, prob take me a little while with all the pictures and modifications I already completed.
Anyway hope to make some new acquaintances.

Hello. I started fishing regularly with the boat I bought 2 years ago. I think there is something to learn in this forum.

A big welcome to all the new members! Thanks for joining our forum. :beer:
T

Well hello from Ga. I'm Mike 55 years old and love to fish I have a 95 bass tracker and just bought a all original first year 1978 bass tracker. Hope to meet new people and some new things.

Hi everyone
Lu here from Mississauga, ON. Looking to get my first tin boat (hopefully Alumacraft V16 but if an old bass tracker or grumman 17' shows up, I will not be averse).
Hoping also to do some neat things to the boat. Expect posts asking all kinds of questions about everything from bilge pumps to livewells to picking the right sonar / trolling motor combo.
Thanks!
E

Greetings from San Diego! I just purchased my first boat, a tinny 2013 16' Lund Fury running a 25HP Merc on a Shorelandr trailer. I'm a novice fisherman and boater, mostly keeping it on local lakes and San Diego/Mission bays, targeting varieties of bass and whatever else bites. My fishing buddy is my son who recently fell in love with angling and that helped convince the Mrs. that we should own a boat.

Looking forward to learning more from you all. Thanks for having us.
D

Hello! Newbie tin boat owner from western North Carolina. Thanks for having me here and hope to learn alot. 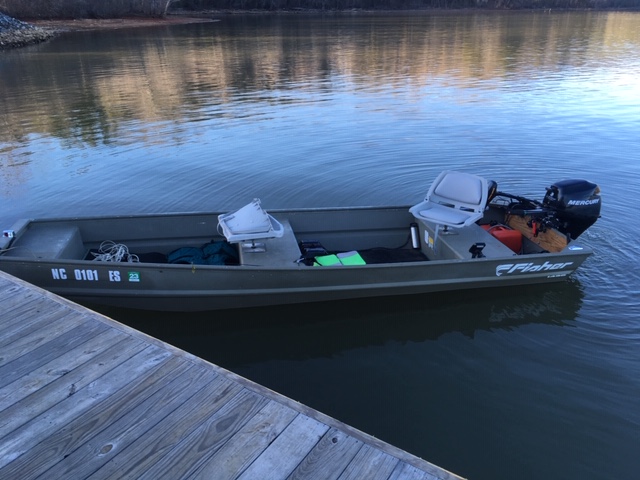 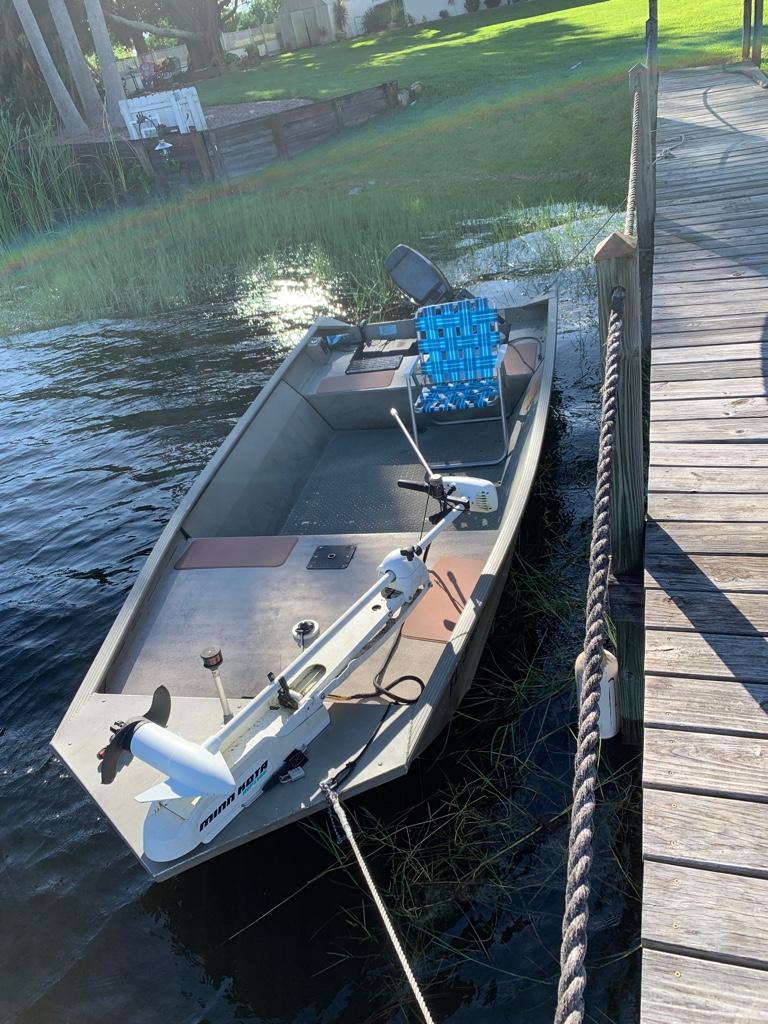 Hi I’m Steve,This is my G3 1548 VBW Gator tough... we’ll call this the before picture as I am about to do somethings to refresh it!
I live in central Florida on a small lake and try to get out as often as I can.

Sent from my iPhone using Tapatalk