Bought a lake house over the winter, so I also ended up buying a boat. Now I'm learning how much I have to learn.

14' Mirrocraft (based on serial number) v-hull fishing boat. 64" beam. Has a 25HP Johnson Outboard, manufactured in 1984 based on the serial number, so likely original to the boat.

Have a few questions.

Context. Will be used 99% of the time on a +/-120 acre lake in northern Michigan. Maybe at some point in the future would trailer someplace else, but no plans at all to use on any of the Great Lakes.

Motor has electric start (and throttle and steering from a right-side console mounted to middle seat). In addition to navigation lights has (will be replacing in kind) a bilge pump, and I expect to add a fish finder and transom mount trolling motor.

Should I be looking at a single dual-purpose battery or getting two, both a starting battery and a deep cycle one?

For the other electric stuff, I'm either adding them or replacing, so I can determine how many amps. But does anyone have any idea what type of amperage the electric start might need?

While a lot of really cool all-out modifications to add floors/casting decks and can be found on here, at least for this year I'm thinking of something a good bit more modest, and with the steering console I'm unlikely to want to mess much with the center bench seat (not to mention the questions about structural implications of removal). And I'm well aware of my DIY limitations, so I'm largely going to be confined to working with wood, not bending, welding, or otherwise using aluminum framing. But...

Is the front bench seat structural? I removed it this weekend, in part just to see if I could and how it is constructed. There's 3/4" plywood underneath the aluminum running the width (49 3/4 wide at the front side, 54" on the rear). Now that I see that, at minimum I'll probably cut a new piece to replace as it's pretty clearly original while not bad for nearly 40 yrs old still could probably stand replacing... if i keep it. Or, is this not structural and something I could eliminate and put in a floor running from front of middle seat to the bow, giving me space to mount a swivel seat for fishing?

There are 14 ribs with distance between usually 9-10" with an 11" or so thrown in for whatever reason, but between very front one and second one distance is 14"

Alternatively, I'm considering putting the seat back in and using it as part of the support to hold up a smaller little casting deck that would run from just the rear edge of that seat to the bow (which is still about 59 inches at gunwale height though a bit shorter assuming I keep the deck at seat height.

Assuming I put the bench seat back in, should I just reinstall the original foam block underneath, or would I be better off rebuilding the "box" cavity (it's open to the bottom, but has 3/4" plywood "sides" and filling up with a can of Great Stuff?

I'm also thinking of doing something similar at the stern, creating a seat level deck that runs from the front of the rear bench to the transom, giving the ability to put in a couple of hatches and hide the gas can, battery (batteries?), bilge, etc. and just clean up the look a little. Maybe a mount for another swivel seat too, but one I can pull up and stow while underway

Thanks in advance for any tips/insights.
W

A deep cycle battery will have plenty enough jam to start a small motor. Recommend a group 27 or 31.
As for simple decks, it can be this easy. https://tinboats.net/forum/viewtopic.php?p=480883

Sent from my CLT-L04 using Tapatalk

Nice boat. You have the original Mirrorcaft seat mount console, and it looks like the original steering wheel. I am sure it was converted from the old cable steering to the new flex cable.

While you have the seats out and foam out, replace/install wood bottom for stronger support if you are going to add seat mounts. You may want to mount them while the foam is out. You will be able to mount them with through bolts and have them really secure. I did this on the font and back seat. The seats should have aluminum end covers to close the seats up. Use 2# closed cell expanding foam (Coast Guard Approved) to fill the seats back up.

I have a very simple bow casting deck. Rivet some L bracket to front of fwd seat, trim some plywood to match the bow, and it lays on the inside on the hull mold line and L bracket. I will have to post some pictures, but it is simple and works great.

Posted this before, but here is a copy of 1980 Mirrocraft catalog. 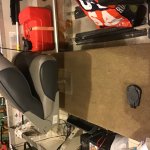 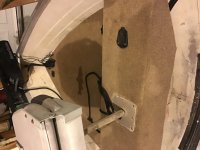 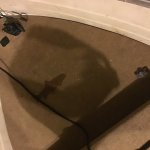 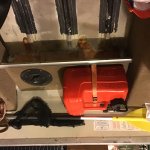 Yes, I saw that post and agree that a relatively simple starting point is a good one for me. Thanks.


Weldorthemagnificent said:
A deep cycle battery will have plenty enough jam to start a small motor. Recommend a group 27 or 31.
As for simple decks, it can be this easy. https://tinboats.net/forum/viewtopic.php?p=480883

Sent from my CLT-L04 using Tapatalk
Click to expand...

Thanks for the advice. Is that side bench connected between the rear and middle seats? Hadn't thought of that, but it looks like a really good idea.

When you say the seats should have aluminum end covers... do you mean just wrap the edge of the plywood in aluminum flashing or something? The plywood in their right now wasn't wrapped, so the ends were in contact with the seat brackets.

It’s not a side bench, but more of a shelf. Attached a piece of L bracket between back and middle seat. Sheet of aluminum that lays on L bracket and mold line. Perfect for a gas tank. Made a mold out of cardboard and poured expanding foam underneath it for support.

The seats should have some plywood reinforcement under the aluminum, I put an extra sheet of plywood, (not the whole length of seat) because the tall seat had some flex in it.

I also put kayak rod holders in the front and back seat. They were small, had the rubber caps, and could still sit on them if needed.

The casting deck, I like it lower than the ones that are on top of the seats. Old age and balance.
S

InSaneFisherMan said:
The seats should have some plywood reinforcement under the aluminum, I put an extra sheet of plywood, (not the whole length of seat) because the tall seat had some flex in it.

Got it... there's plywood the whole width underneath the aluminum. The foam is basically just in the middle third of the seat (at least in the front bench) and on either side of it there's another piece of plywood, so that on top, left, and right there's plywood and front and back aluminum such that the foam is a solid rectangle, only side you'd see foam from is the bottom, but the the aluminum is turned just a bit at the bottom edge, creating a bit of a ledge that I assume helps hold it in, likely just adhered to the plywood too.

Thanks again for the insights. Getting some decent ideas and will likely try to start small this year, get a better feel for the boat and then maybe do some more extensive projects over the winter next year when the ice isn't thick enough for fishing.