Well guys. Here ya go. I don't know much about the boat yet. I picked it up on Saturday and only spent about an hour looking it over. I immediately removed the steering console, and the seats pictured. The seats are in pretty good shape, so I will hold on to them. If anyone has a use for the steering cable/console, you can have it if you'll come get it. The seats were screwed down to livewell lids. I will post more pics the next time I can get out there and do some work. The decks are pretty solid, but I'm replacing them anyway, #1 because I'm fairly anal, and #2 they will probably both get extended. I would really like to get this thing entirely stripped down, take it to the lake, check for leaks, and start from there. I've never done this before, but I've been thinking about this for about 2 years now. I am really glad to finally get this project started. The little man in one of those pictures is one of the main reasons I'm doing this. I have 2 small boys, and if you saw the picture of my current rig, you probably understand that it would be very difficult to have a 5 and 7 year old in that boat with me. The new boat should help that a lot, and outside of tournament fishing, I am really looking forward to spending time on the water with them.

Lemme know what you think of the new tin cup. I will do my best to post pictures of the progress. If anyone has any advice along the way, don't be afraid to offer it. I will probably be asking questions throughout the build. 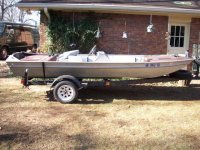 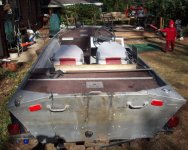 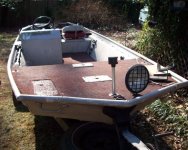 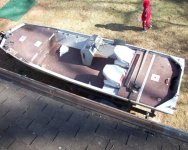 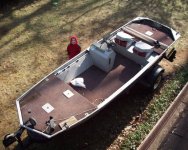 Awesome rig... you're going to have fun with that rebuild.

I almost bout the exact boat back in the summer from a guy in Hiram - but he decided not to sell when I showed up with the money.

Do you have an outboard or are you doing electric only?

russ010 said:
Awesome rig... you're going to have fun with that rebuild.

I almost bout the exact boat back in the summer from a guy in Hiram - but he decided not to sell when I showed up with the money.

Do you have an outboard or are you doing electric only?
Click to expand...

Thanks for your compliment.

Look Daddy's on the roof :lol:

Yep, they make it worth while

you gotta a great boat there, if I was closer I'd pick up the steering, of course it just hang in my garage :lol:

Where in Ga are you? If its close, I may have to make a road trip!

Where in Ga are you? If its close, I may have to make a road trip!
Click to expand...

if he says Lathem is the farthest from him - he's either far east or far south of Atlanta.. I'm only about an hour south of Chattanooga

Nice rig ya have there, and lookin' forward to the mods as you make them ! 8)

instead of taking it to the lake to see if there are any leaks, risking it sinking. fill it with water and look for the leaks. i did this to mine and it worked awesome. found a lot of little leaks that i couldn't locate on the water. it will give you the ability to see under the boat. good luck.

92yj said:
instead of taking it to the lake to see if there are any leaks, risking it sinking. fill it with water and look for the leaks. i did this to mine and it worked awesome. found a lot of little leaks that i couldn't locate on the water. it will give you the ability to see under the boat. good luck.
Click to expand...

Ok. Sounds good. The previous owner said "doesn't leak a drop", so I would just like to make sure for my piece of mind. I was wondering about putting it in the lake after everything had been taken out and whether or not that was the right thing to do. Ideally, I would think you would want the boat to have a load inside to push out on the hull to be certain. I guess filling it with water will serve that purpose as well. Thanks!

Lol...up on the roof to get the perfect shot.
Looks like a great find,hope you and your family have fun with it.


Sorry for the double post.I been having PC problems.

Great Boat! Hope you turn it into exactly what you want!

nice looking rig! Where in GA are you, and do you still want to get rid of the console?

fishinchef said:
nice looking rig! Where in GA are you, and do you still want to get rid of the console?
Click to expand...

Thanks. I'm in Gwinnett County, close to Bass Pro Shops in Lawrenceville. No, I don't want the console. This rig will be set up for electric only lakes. If you want it, you can have it. I don't want it laying around much longer.

Dang. I was just in the Atlanta area yesterday. What year and make is your 15hp motor?

stew6371 said:
Dang. I was just in the Atlanta area yesterday. What year and make is your 15hp motor?
Click to expand...

Got a chance to take some more pics, and have a several questions for you all.

As I mentioned before, I removed the steering console. Here is a different pic in case this makes someone wants it. :shock: 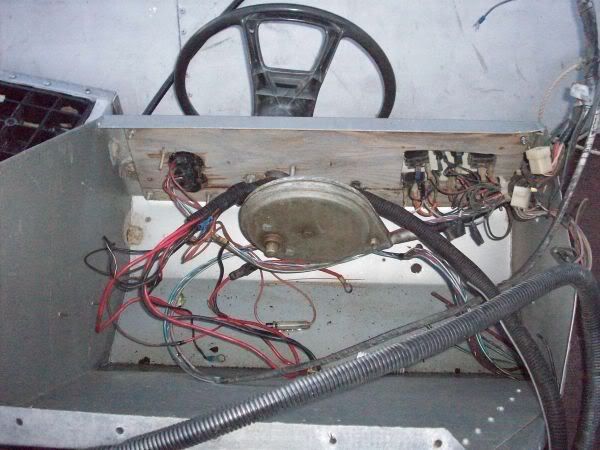 First Question: What's the best product/process to fill holes like this in the gunwale. These are from where the steering column was riveted to the boat. 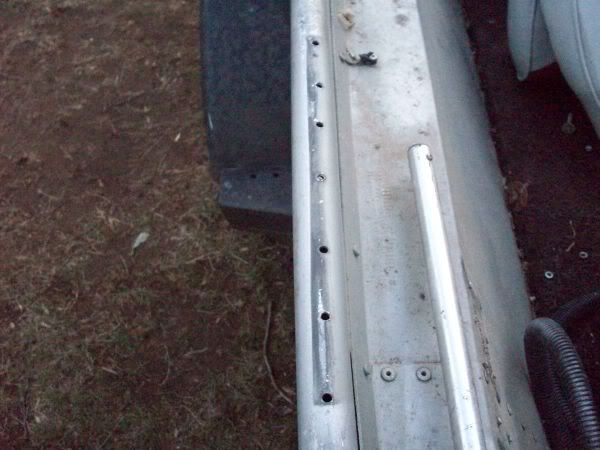 Second Question: What would you do with the transom. The board isn't really soft anywhere, but it isn't like new either. Also, the cosmetics of it are making me twitch. Don't think Picasso could touch this one up. What am I in for in trying to replace this board? Good Idea? Bad Idea? 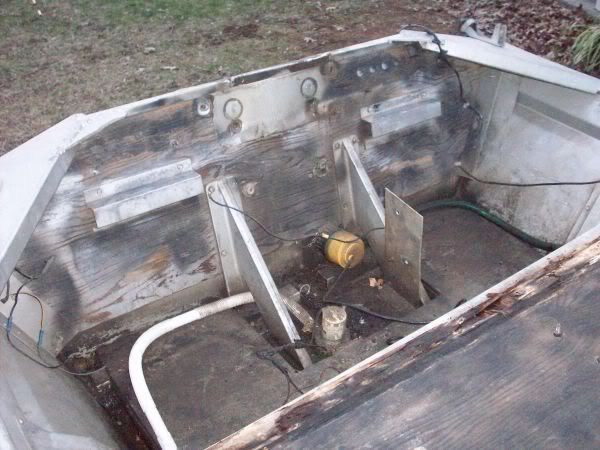 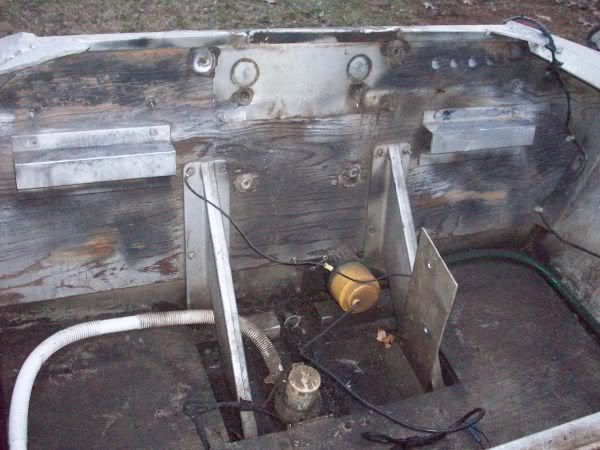 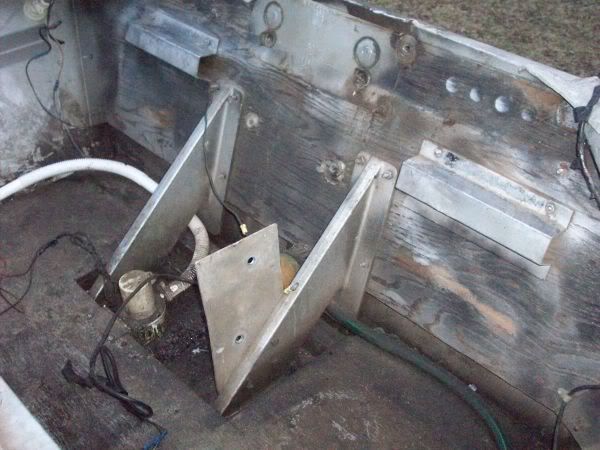 Third Question: This is apparently homemade reinforcement for the 50hp that was on the back. I will never have more than a 9.9 on this boat. Should I cut it out, or leave it? Again, the cosmetics are annoying me. 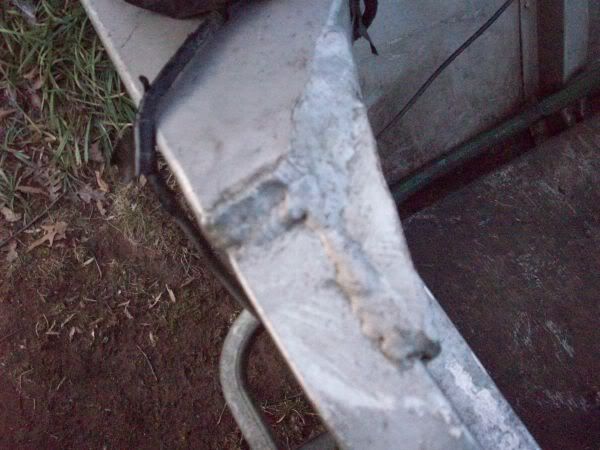 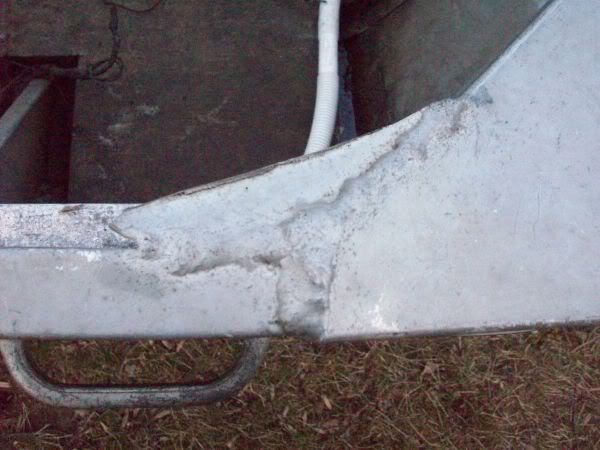 Fourth Question: There is a crack at the top of the transom on the right side in this picture, hence the homemade reinforcements above I suspect. Suggestions on repair? No, I don't weld. All of these screws attaching to the plywood on the inside are really what is scaring me from messing with replacing the transom. Justified? 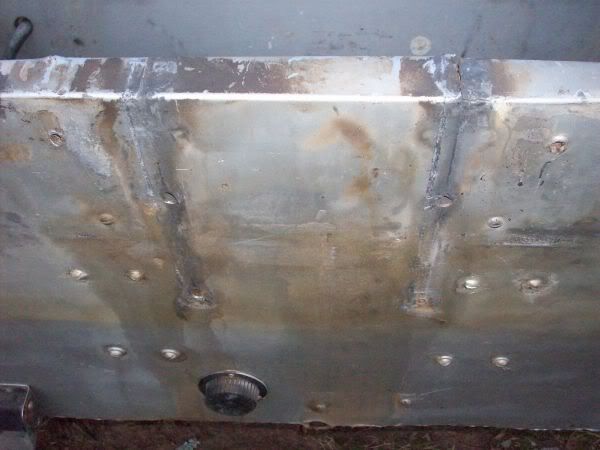 Apparently, this piece of angle iron was set on the transom when the big motor was on it. 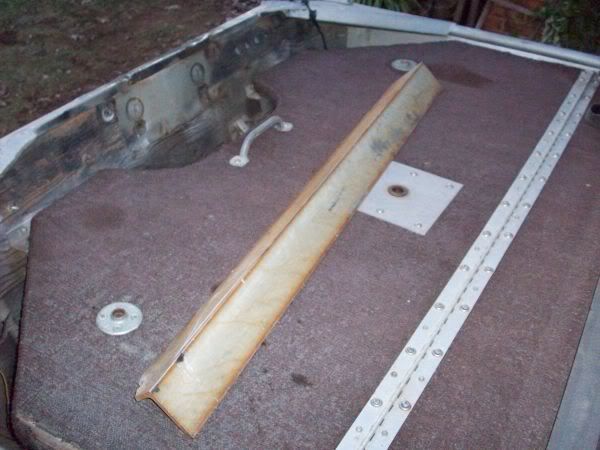 Also, here are a few pics of the bow deck and how it was engineered. 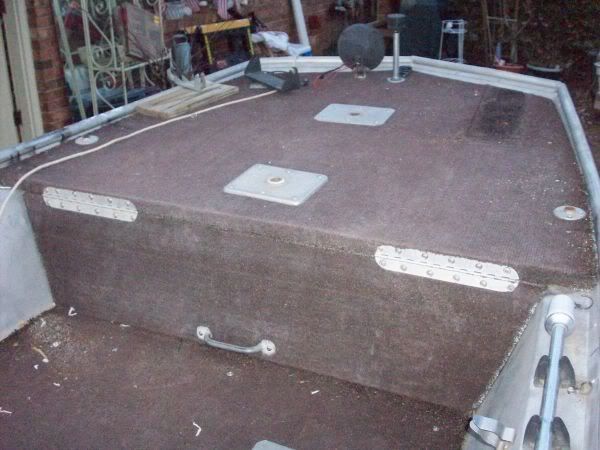 Hatch open showing support from underneath. 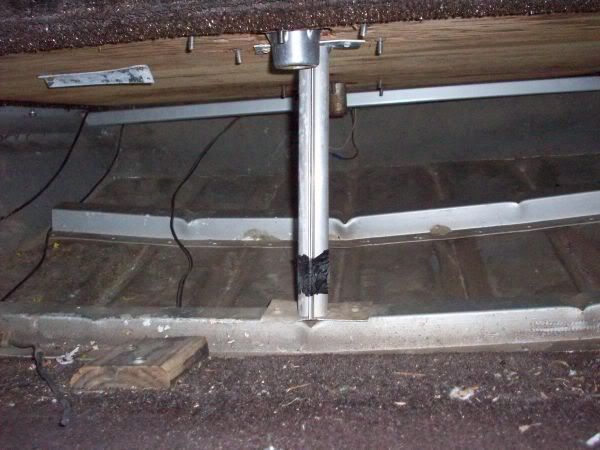 Lastly, here is a pic for all of you who are contemplating plywood decks. Not sure how old the boat is yet, but it was kept under an aluminum roof with open walls. I'm not saying plywood isn't the right solution for any of you, I just wanted to point out what can potentially happen with it, because I've seen it mentioned here numerous times without any pics. 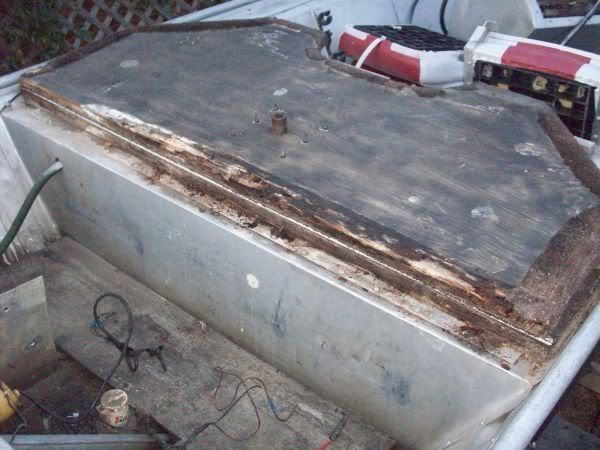 ALL RIGHT GUYS.....HELP ME REBUILD THIS THING!
Thanks in Advance for the Advice.
Brine

Brine... here are a few things you could do to in reference to your questions...

1 - you can use some of that epoxy that comes in small tubes that you roll around your fingers then put on whatever you want to mend/put back together/fill holes... whatever. I've got some that is made especially for aluminum.. once it's cured, you can sand over and paint it.

2 - If you are going to redo the rest of your boat, you might as well do your transom too... go ahead and take care of everything at one time. If you are planning on painting the boat, then you can take all those screws out and fill them in with the stuff from #1, then sand it and paint over. But if it's really bothering you and the wood doesn't seem that bad, then get you a good deck stain/paint and go over the transom with that. You could also take care of the fabrication in step number 3 by covering the transom and the top edge of the rear in carpet.

Moving on to #3.... If you have a side grinder you could plane those pieces down and make the cosmetics more appeasing to you.

Just from looking at the inside and outside pics of the transom, you may not want to fill-in the ones I've drawn a line around. Those screws appear to go to the knee braces supporting the transom inside. If you replace the transom wood, you'll need to not fill those 9 holes, so as to reattch the knee braces.