First off, I've been a long time lurker (joined 7 years ago) but this is my first time posting. I've finally decided to share my rebuild/project in hopes of gaining some info to help me complete a few portions of the build.
I owned a older 1654 Monark for many years that saw more transformations and different layouts than I can remember. One day I got a call from a friend who does marine salvage for insurance companies and he told me about a stolen recovery boat. It was too good of a deal to pass up and a few days later I had a gutted 1860 Grizzly. I threw it together with a 40 H.P Evinrude and console from the old boat and fished and hunted it that way for a few years. 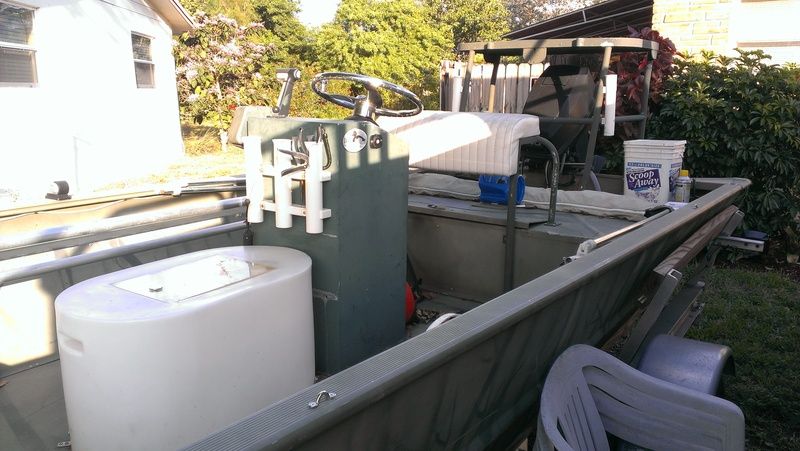 I finally decided to upgrade to a larger outboard and make a few other modifications while it was apart to repower. 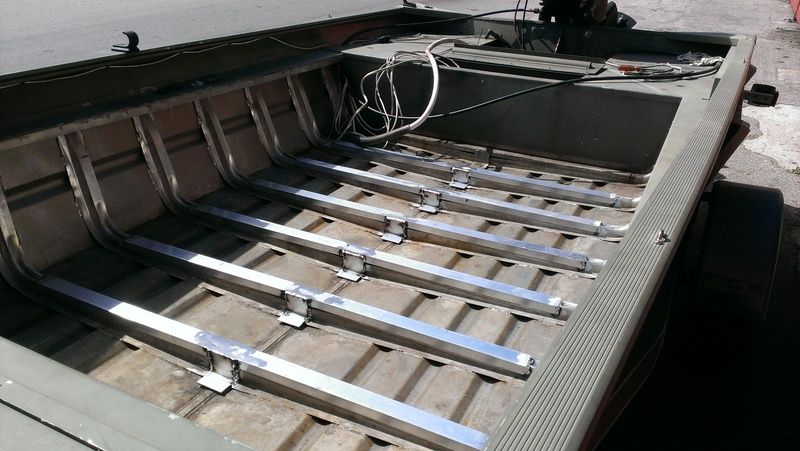 Removed the old floor and supports and welded in new ones 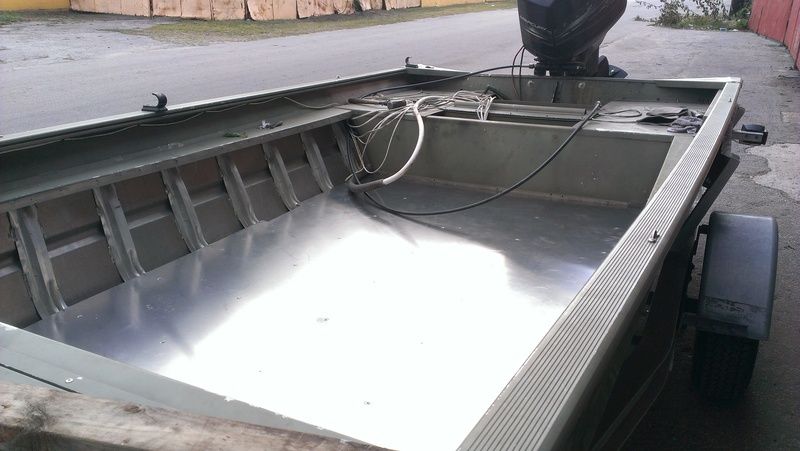 New 1/4" floor all secured. Is it heavy...yes! But it sure as heck doesn't pop and rattle anymore!! This made the boat so much more solid feeling that I wish I had done it originally. 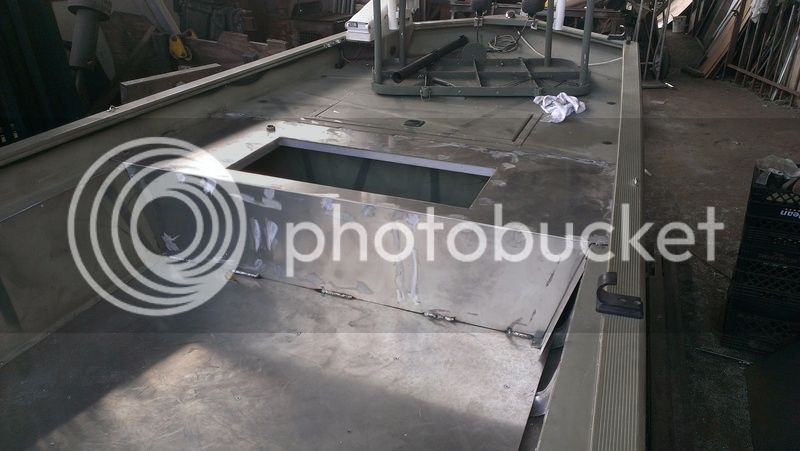 I wanted more deck space, and needed more storage so the front casting deck was extended 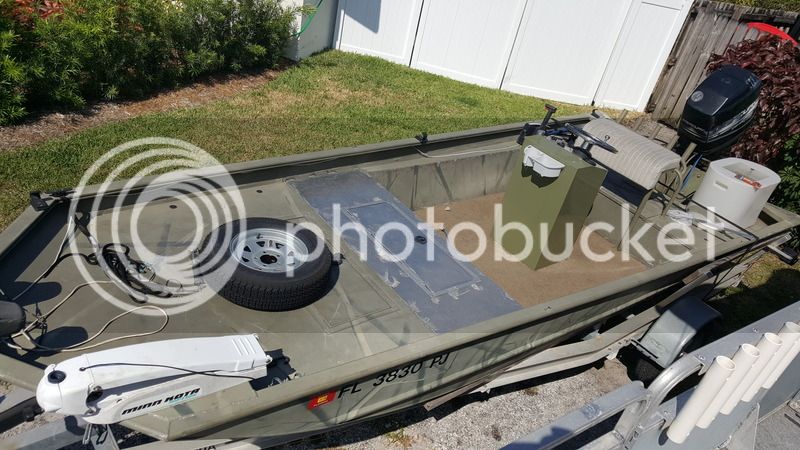 I built a new console and added a few rod holders to the leaning post which I built for the old boat. This is how she sits currently. I carpeted the floor only because i had to put something down until I can make up my mind on what I want to do with the casting decks. It's like standing in a frying pan once the sun comes up on this thing. I'd really like to have the interior Linex'd but I think it'll be way too expensive. I just haven't had a chance to take it by Linex for a quote.

Anyone have an idea what it might cost? I've also been reading into Kiwigrip lately, as I know a lot of big boat guys have used it with great success. I don't really care for Tuff Coat, and I'm not sold on Hydroturf seeing as I dont keep it covered. I fish both freshwater and inshore, as well as gator and occasionally duck hunt out of this boat if I hunt areas where I can't run my airboat. I need a deck surface that remains cooler in the heat of the day, but cleans easily and remains durable.


and congratuations on being the longest "Registered Lurker" in this forum !!

Looking good! I like the way you are laying out that boat with the CC setup.

Looks good. I too am wondering what to do for my bare aluminum floors. I'm building an older 1860 right now.

Sent from my SAMSUNG-SM-G890A using Tapatalk
A


and congratuations on being the longest "Registered Lurker" in this forum !!

Lol it even surprised me when I saw my registration date!!

I MIG'd the deck extension, floor supports, and anything that doesnt need to look fancy. I TIG'd the console, but smoothed all the corners before it went to powdercoat so it wasn't really necessary.
A

Thanks guys! Starting with bare floors if money isn't a huge object I would go straight to Linex and call it a day. Carpet is nice because it's obviously much cooler than bare aluminum and it's cheap, but in my opinion thats where the advantage to it stops. It holds way too much sand, mud, and salt, it stains, and will eventually mildew and rot.

I'm going to try and get a quote from Linex this week, and if I can't swing it financially I'll look more heavily into the tintable Kiwigrip and see if I can get a tan color dark enough that I'm happy with

Don't know what linex cost. But I have a quote from rhino liner and there's was 7$ a square foot.


Sent from my iPhone using Tapatalk
A

Fordracing2105 said:
Don't know what linex cost. But I have a quote from rhino liner and there's was 7$ a square foot.


Sent from my iPhone using Tapatalk
Click to expand...

Thanks! I did some searching and it seems like LineX of Sarasota sprays XS-650 for about $15/sq. ft. That's their fancy stuff that they spray on Yellowfins and other big $$$ boats.
J

Anybody used the Eva foam floor pads (from harbor freight, $9 for a pack,1/2" thk) for flooring? Pads are med grey color, but a quick spray can overshoot, lighter color of choice, might suffice. Maybe a dab of hot glue at each corner of each pad to hold them down (easy to take back up).
A

Sent from my SM-N920P using Tapatalk

Sent from my SAMSUNG-SM-G890A using Tapatalk
A

It's something I'm currently trying to remedy. I just relocated my starting/accessory batteries into the center concole from the rear bench compartment, and I'm researching props. I think I could really benefit from a good stern lifting SS prop

Sounds like something could be improved with your set-up, prop, engine height, something: Suzuki DF90A on a Sea Ark XV18CC gets to 45mph, see:
https://www.suzukimarine.com/Product%20Lines/Outboard%20Motors/Products/DF90/2012/~/media/Marine/BoatBuilders/TestResults/S/Sea%20Ark%20Boats/Sea%20Ark%20XV%20180%20CC%20DF90A

Pretty sure the SeaArk, with all its fancy interior furnishings, might be heavier than your rig. Any problems (hooks, big dents, etc.) with the bottom of your boat? Is the SeaArk known to be a faster boat than a Grizzly?

I'm just getting into welded aluminum boats and don't know much about the different boats and manufacturers, which ones are good, bad or best. Only ones I've looked at closely are the Grizzlys. Looking at SeaArks in the next 2 weeks.

My background is with fiberglass offshore twin outboard boats which I ran owned/ran/serviced all engines etc. on for the last 20 years (last was a Contender 25 Open with twin F150 Yamahas). Getting into lighter, easier, cheaper to maintain boats now that I'm 65.
A

I would venture to guess that my boat is similar in weight to that Sea Ark with a heavy floor, extended deck, and 4 batteries. I don't know if one is known to be faster than the other, and there is nothing noticeably wrong with the bottom.

I'm going to do some testing with engine height and props to see if I can't get it running a little better. I agree it's most likely something with my set-up that is holding it back.

Sent from my SM-N920P using Tapatalk
A

Time to update this old thread! I've been using the boat as it was for the last couple of years with too many major changes. Aside from recovering the leaning post cushion and going to a 36 volt trolling motor the boat remained the same.

Last year I decided to rig the boat up for bowfishing and bullynetting and got to work on building some lights. Here's a picture of how it looked afterward 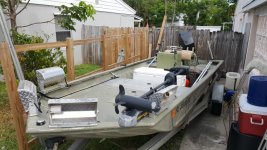 The outboard started giving me reasons to question it's intentions so I began to look for another replacement, which has once again lead to a rebuild. I put together a 3-cylinder 90 h.p. "Frankenmerc" as we like to call it. Took parts from three different motors to build one. Then I decided it would be a good idea to completely strip the interior for non-skid 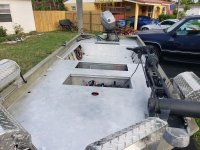 But why stop there? I've always wanted a tower boat so why not build one now? So I grabbed some aluminum pipe and started to build a tower. Never having built anything quite like this before I've learned quite a few things as I go along but here's where I'm at now 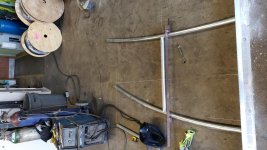 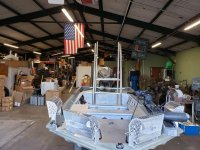 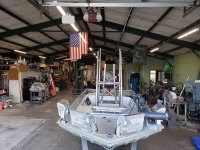 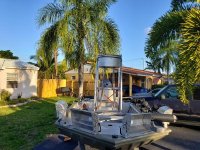 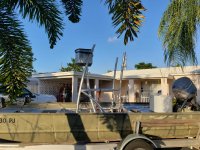 I'll update ad I go, but I'm hoping to have it back on the water in the next few weeks
E

Your an artist with these boats [emoji106]


Sent from my iPhone using Tapatalk
A


Sent from my iPhone using Tapatalk
Click to expand...

Thank you for the kind words! I was fortunate enough to grow up around a metal fab shop so the flat stuff like decks and console come pretty naturally to me. This is however my first time ever atempt at building a tower or anything like this. Admittedly the design was a bit ambitious for my first try, bit I'm learning as I go. I'm happy with how it's turning out so far
A

Not much to update as I only get an hour here or there after work to spend on the boat. Just a few pieces at a time on the tower and started laying out the console. A top hoop and a bunch of rod holders then I should be able to pull the tower out and weld it all up. I'll rig the boat and spend some time on the water before powder coating the tower just in case I need to make any changes. 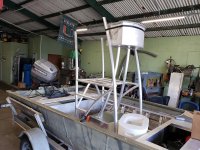 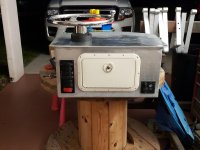 I've been busy with work and family but made a little bit of progress. Just a couple more bars and a bunch of rod holders then I can pull it apart to final weld the tower.

I'm hoping that I can get torn down and get the Kiwi Grip done next weekend. I may pop the back deck off and see about building livewells below the deck. I'll be going on vacation mid June so I'm not sure if I'll have the time to tackle everything. 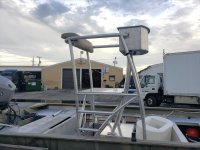 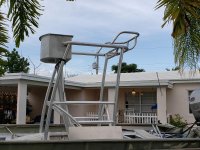