After owning a Klamath 14 foot aluminum for 18 years, I felt that it was time for an upgrade. I fish the Eastern Sierra lakes and anything in Nevada for trout and kokanee. I troll for Kokes and fly fish for trout. I felt that I needed a little longer boat and something with taller sides. My goal was to have a boat that two could fly fish from without rocking the boat on every cast.
Research lead me to the 16 foot Gregor Alaskan. Big, strong with a flat floor, forward casting deck and very wide. I placed the order last year for a tiller-steered model and it came in a couple of weeks ago.
One problem that I had was that no one could make an HP recommendation for the boat. It is rated at 50 HP, but I felt that would be too much for me. I called Gregor and spoke with one of their guys. He indicated that I would be happy with a 25 HP and that the boat would do about 20 with two on board and associated gear. Heeding the advice here and other forums, I felt that that would be a little low. I went for a 30 HP motor that and prayed that it would be enough.
I had to pick up the boat out of state because there are no nearby dealers. Once home I began reading all of the related manuals and quickly realized that the selling dealer had failed to adjust the bunks to properly support the boat. The boat manufacturer mandates that the bunks be placed between the outer edge and the outer-most chine. The dealer had installed the bunks completely crossing the two outer chines. WAY OFF!
I spend a day building new brackets that would properly support the boat. This was easier than driving four hours to have the dealer fix it. 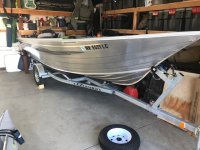 Now for the fun part. Buying all of the stuff needed to outfit it the way I wanted.
Here is a breakdown of all of the crap I bought:

I won't add up the numbers because I really don't want to know.

It took several weeks of free time to install everything the way I wanted it. I really like the LED lights. Although the red lights look a little like "Pimp My Ride", they do keep from burning out your night vision.

I took the boat out last week on Pyramid Lake in Nevada to complete the break in period on the motor. The boat ran great and did 23 mph after the break in with two persons aboard. This is more than enough speed for me and what I do.

I am grateful for all of the previous posts on this forum. I spent a great deal of time looking at other posts to see what others had done and most importantly, why they did what they did.

One thing that I can't get any information on is the new "sealed for life" wheel bearings on the trailer. It is an EZ Loader trailer and their manual does not mention them. It mentions oil bath and regular grease. Dealer couldn't help much either. I will reach out to EZ Loader, but I was wondering if anyone else has come across these yet......

Congrats on the new boat. I spend most of my time trolling for trout at a couple of No. Calif foothill lakes. Kokanee not so much.

Knott Sealed Hubs: I have a Gregor Sportsman on an EZ Loader trailer with the Knott sealed hubs. I had the exact same question (literally) and contacted EZ Loader about maintenance. The response was basically that the hubs require no maintenance and that they have had very good experience since they have been using them. They said do not open them up or mess with them. Say if I ever had an issue to let them know.

Trailer Fit: I also had the same issue with the trailer fit (chance we used the same dealer). I also had to spend some time tuning the trailer. But I don't have mine next to the outer chine. I must have missed that. Maybe varies by model, but I'll need to take a look at the literature. One other thing I did not like was the small amount of clearance from the fender to the chine. I added 1.25" spacers to widen the gap.
W

I am not into internet shaming, but I purchased it at a dealer between Rocklin and Auburn
My solution for the bunks raised the boat about an inch, but it is still close to the fenders. No issues launching or retrieving...yet...
I think I recognize one of the lakes you fish on. I used to live in the bay area, but fled the state to cut down on income taxes. I mostly fish Frenchmans for trout, Stampede for the Kokes and then a lot of Nevada lakes fly fishing for trout.

WATER BOUY; It is a Honda with electric start and power tilt. I went with the Honda because my previous motor was a Honda and it ran like a jewel. Never had any negative issues with it. This motor seems quieter than my old 20 HP , maybe because it is a 3 cylinder instead of 2?

I'm typically at Camanche or Berryessa. Pardee is just down the road from Camanche and would be my closest best bet for Kokanee. I've only been there once. Not sure why as it is a nice lake. Berryessa Kokanee population didn't survive the drought. Anyway, I'm retired so can get out during the week and avoid the weekend crowd.

Yep, those accessories can sure add up -- especially when you add a new 1-ton GMC. Haha.


PS; Yeah, no need to beat up a dealer. I'm actually pretty happy with the boat and they treated me right on some other stuff. So it all evens out in the end.
B

Curious what fishfinder you went with,
that you feel the 2" ram is overkill.

I recently upgraded to a HB Helix 7.
I bought the recommended 1.5" ram
mount, it seems pretty stout, but I'm
still a bit concerned it may move in
rough conditions.

I've yet to install it. Everything is still
frozen here, & my garage is not heated.
S

The 2" Ram is big. Really big. It is also very heavy. It does work well with the unit, but man, it is big. I do like the extended length that it affords. I can tuck it out of the way or raise it to a comfortable level. I think the large RAM mount is designed for those boats that use computer screens as displays. I'll keep it, but it was not needed.

I'll try to get some pictures this afternoon..... After I get the snowblower out and clear out the driveway. Had 12 inches of snow just south of Reno. Heavy, wet snow. Might take a while.

Here is the HB mounted and deployed on the RAM mount. The mount is affixed to the package tray in front of the drives seat 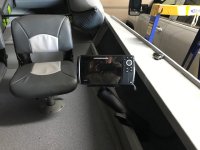 Here is the unit stored inside the package shelf 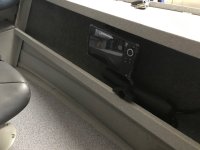 Thanks for the pics Bill.
I had a look at the Gregor website, that's a really nice ride, congrats!

It's been nice enough here to mess around in the garage, so I got
my head unit mounted as well. I'll start a new thread, so I don't
further derail yours.

Congratulations. I have been lusting over one of these Gregor Baja/Alaskans for years. On paper they look....perfect for my applications. Problem is I've never even seen one in person and out east they are rarer than hens teeth. Oh well, maybe one day.....