First trip of the year with fixed up boat = new PB

Couldn't have expected this one. I took my parents out on the maiden voyage for the year after all the work I have done to the boat. We went bass fishing on the nearby reservoir for a shakedown trip.

Was July 5th, very hot calm day. I took the boat just a short ways across the reservoir to other shore and we fished the bank a bit, caught maybe a few dinks, like 6inchers. So we went to move to next spot, and big engine was just slow cranking and wouldn't restart. This is with brand new Walmart cranking battery, left it on charger beforehand like usual. I wasn't to worried about it so we just used my Lithium battery jump starter and it cranked right up, off we went.

Made it to the next spot, small inlet and we fished around that still catching 5-6inchers. I was driving the boat, trolling motor up front with foot control. Besides fishing I was maneuvering the boat around a lot to retrieve snagged lures :lol: So I was partially paying attention to my fishing and partially to theirs, helping my mom with tips for fishing. This is only like the 2nd or 3rd trip out for her bass fishing so plenty to learn.

I tossed out, let the crawfish shaped jig sink until it stopped and felt that slight weightlessness, pulled a bit to feel that weight and then set the hook. It was almost like setting up on a snag, that heavy weight, except it pulled back this time. It was coming up fairly easily and made it out of the water one time. That's when I YELLED to get the net LOL. I kept it in the water the rest of the time, it was digging a little bit, but not a huge fight. The weight was really what was keeping it down. 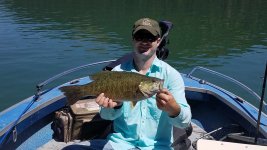 As for weight, I have a $4 scale that I've had for about 20 years and used to weigh the fish and it showed 3.75 lb. So I bought a new scale to test against my cheapo garbage scale, a Rapala 50lb High Contrast digital scale. I can get the Rapala scale to show anywhere from 4.2lb to over 5lb when pulling against my garbage scale depending on how gently you pull against it. Wish I would have got a girth reading but I had that fish back in the water quick after the length measurement and then held it for a good minute or more letting it recuperate. Took off strong so I'm sure it was fine, bass are tough anyway. These fish are like dinosaurs though, to get to that size takes many years in our reservoir.
Side story on size of these fish below if interested.
[spoil]I caught a tagged "reward" fish on this same reservoir in 2016. The ID Fish and Game tagged the fish and released it near the dam at 14.508" on October 3, 2015. I caught the fish in May of 2016 at the other end of the reservoir, about 28 miles away, and it had only grown to 15". So over the winter and part of spring it only grew a half inch. This size fish can eat smaller fish pretty easily, so you would think they would grow fairly fast, but I guess the cold winter months really slow them down. Even if we say that a 15" fish grows 1" per year, that's 5 years plus whatever it took to get to that point. This fish had a $50 reward on it, and IDFG sent me a document with all the info about it.[/spoil]

Yep I was pretty much shaking for a little bit after that one. Every other fish we caught that day were dinks, maybe 7 inches max lol

Again... I was NOT expecting that on the first trip out!

Awesome catch. And on your first trip out to boot. Thanks for the report!

Awesome fish! Thanks for sharing!

Thanks guys it was quite the experience. Nice to have witnesses too haha

And a good scale for the boat now as well

I Just read the spoiler......wow! Interesting for sure.

What kind of jig were you using to catch that big smallie? also, by itself or with a trailer?

It was a Z-Man TRD Crawz, in a greenish color, maybe "California Craw" on a I want to say 3/16 oz jig, that mushroom head style popular with Ned rigging right now.

That Z-man plastic is serious stuff, you can stretch it like 12" and it won't break. Put a dab of superglue to the jig head and it will almost never wear out.

I’ve caught a couple 19” smallies and boy do they put up a good fight. Congrats on your 20” beauty!

silentbravo said:
It was a Z-Man TRD Crawz, in a greenish color, maybe "California Craw" on a I want to say 3/16 oz jig, that mushroom head style popular with Ned rigging right now.

That Z-man plastic is serious stuff, you can stretch it like 12" and it won't break. Put a dab of superglue to the jig head and it will almost never wear out.
Click to expand...

We use those Z-man 6” down in Mexico during our annual Bass trip and they last forever even after a dozen 5+ pounders.

First good catch of the year